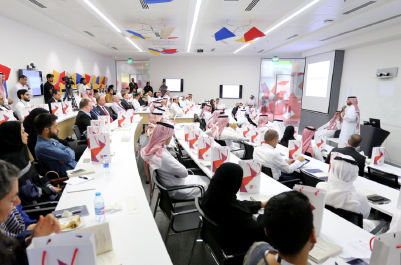 Flourish in the World’s Most Exciting Greenfield Site

To be an entrepreneur is to take the road less travelled. It’s about blazing your own trail and leading the way. It’s about having the ability to see an opportunity, and the courage to grasp it.

Choosing an MBA is no different. But what do you stand to gain from defining your own path?

Living and learning in a global greenfield

When we talk about a ‘greenfield’, what we mean is a site or opportunity that has flourishing potential. A fertile ground for development and investment. A place where you can live and work in an international business landscape, unencumbered by the weight of convention or tradition.

Aside from the excitement that comes with being one of the first entrepreneurs to study in KAEC, living in a new economy brings with it a host of other benefits, including:

– A foot in the door from day one. Being there from the start means you’ll have early access to the myriad of businesses and investment opportunities on offer in today’s Saudi Arabia – not to mention the space you need to pursue your own ventures.

– The certainty that comes from living and learning in a growing economy. Thanks to Vision 2030, Saudi Arabia is set for exciting times with new investment opportunities flooding in. It’s one of the world’s booming economic powerhouses.

– A new way of thinking, unhindered by tradition. Saudi Arabia is growing into a hub of new investment, new ideas, and unbridled creativity. It’s a thriving community of young entrepreneurs from all over the world fueling collaboration and business.

Take your place in the fast lane

The world of entrepreneurship is notoriously fast. Yet all too often, eager entrepreneurs are held back by old ways of thinking and operating.

At MBSC, you can set your own objectives and work alongside other ambitious people in a hurry. Not only will you study as part of a diverse community of great entrepreneurs from around the world, but you’ll be taught by a young faculty of business leaders who are just as hungry to learn and succeed as you are.

But you don’t just start out in the fast lane.

MBSC’s fast-track MBA is also the biggest practice-based MBA program in the world. Which means that once your course is finished, you’ll be armed with the practical knowledge and business contacts you need to hit the ground running.

Explore your MBA options with MBSC

A next-generation city for a new generation

With a spectacular setting on the pristine Red Sea coast, KAEC is home to miles of palm-fringed beaches, modern apartments, international restaurants and a plethora of leisure opportunities. It also sits at an important intersection of some of the most prominent shipping and air routes in the world, making it a bustling hub of new investment and commerce.

Studying in a new city that’s attracting international investment on a daily basis opens the door to a wealth of networking opportunities, and MBSC is positioned to help you take full advantage.

With regular networking events, résumé critique nights and recruiter panels, career days, business insight tours, and more, you’ll have every chance to meet the employers and investors staking their claim in Saudi Arabia.

Step up to success

Entrepreneurial success isn’t a dream – it’s a reality here at MBSC, and many of our faculty have enjoyed international recognition for their achievements. In just two short years, we’ve had multiple award-winners, TV panel members, speakers, innovators and business founders in our ranks, including:

– Dr. Faris Bukhamsin, Co-Founder of ScientificSaudi and a semi-finalist for the 2019 MIT Enterprise Forums Arab Startup Competition for the Social Entrepreneurship Track.

– Basim Al Biladi, who won the Arabian Business Award and is in the 40 Under 40 list. He also and won the Best Social Impact award in the Dubai GITEX Future Stars and won the Seedstars Jeddah startup competition for his business Labayhapp.

– Iskandar Mardanov and Razan AlGhassab, who won third place for their startup ClinTech, a smart waste collection technology in the KAUST STEAM Innovation Challenge.Ahmed AlBader, whose startup Sihatech was part of the International Monetary Fund and won two rounds in MITEF. He is also a guest speaker at the World Bank Annual Meetings.

– Tatiana Vorobedia, who was a guest speaker as the MiSK Global Forum and discussed the Vision 2030 Youth Ahead.

– Diana Rayan and her startup KeesChick, which was nominated for AIM startup finals from the 25 MNEA Startups.

When it comes to choosing a place to study, you have two options: follow in the footsteps of others – or define your own path.

Yes, studying at home is undoubtedly the safer choice. But what you miss out on is the opportunity for personal growth and development.

Studying in a greenfield site offers unrivalled business opportunities and exposes you to new ways of thinking and working. It equips you with a 360º view of business around the planet. It prepares you for a place on the global stage.

To find out more about studying at MBSC and your options as an international student, then please contact the team today.