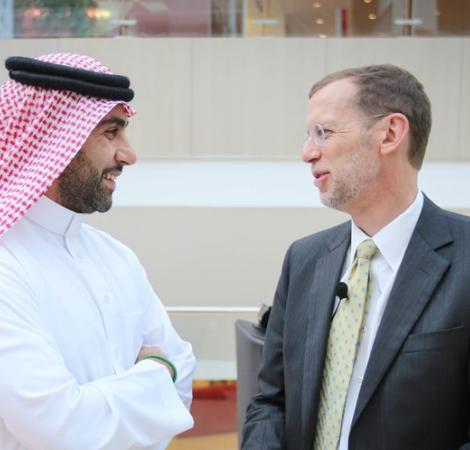 MBSC Connect is an exclusive Speaker Series that will bring local and international thought leaders, practitioners and experts to MBSC and KAEC to share personal insights, lessons learned and discuss the global context of today’s business environment.

Prince Mohammad Bin Salman College of Business & Entrepreneurship, 24 October 2016 – Speaking to a full house at the Prince Mohammed bin Salman College of Business and Entrepreneurship (MBSC) at King Abdullah Economic City (KAEC), Dean Douglas Elmendorf of the Harvard Kennedy School of Government said that, despite the significant challenges facing the global economy, policy measures including enhanced national investment, encouragement of innovation and strong public leadership could do much to restore confidence worldwide.

The Dean was speaking on the topic of “Global Economic and Political Challenges” at the inaugural event in the MBSC Connect speaker series.

Dean Elmendorf noted that the major challenges facing the global economy were interconnected. He attributed slow economic growth to a number of factors including a general lack of innovation and the restructuring of resource-based economies, but also observed that economic growth was unevenly spread across populations. The resulting economic uncertainty, he said, contributes to persistently low interest rates, as households seek to reduce their borrowing.

Changes in supply and demand in commodity markets are also enhancing volatility, he noted, pointing to China’s appetite for many commodities on the one hand and the emergence of new technologies such as fracking on the other.

The Dean also outlined a number of policy recommendations that might, collectively, address many of these challenges. Chief among these was the importance of directing public investment to enhance infrastructure, education and research, especially in areas where people had limited access to learning opportunities.

He also called for the public, private and social sectors to work together to encourage innovation through training and by providing institutional support for new ventures.

Finally, Dean Elmendorf commented on the importance of strong public leadership to implement policy and fiscal changes in areas where they would have the greatest impact and benefit the greatest number of people.

The event was attended by residents of KAEC, local business leaders and members of the Board of Governors of Emaar the Economic City, the master developer of KAEC.

Officially inaugurated earlier this year, MBSC is the first institution of higher learning in Saudi Arabia to focus on developing entrepreneurial leadership skills for students entering government, businesses and civil society. Providing a mix of traditional MBA courses as well as training in soft and applied skills, the College is dedicated to creating fully rounded professionals possessing the total skillset they need to create economic and social value wherever they work and to further the goals of Vision 2030.

“The College is intended to be the preeminent center of human capital development for 2030, fostering a new generation of entrepreneurial leadership in government, businesses and civil society,” said Fahd al Rasheed, Group CEO and Managing Director of KAEC, in his introductory comments. “The future of our country lies with the passion, the drive and the entrepreneurial spirit of today’s youth. MBSC is a pioneer in channeling that spirit for the good of its students and for the nation as a whole.”

Douglas W. Elmendorf is Dean of the John F. Kennedy School of Government at Harvard University, where he also serves as the Don K. Price Professor of Public Policy.

Doug Elmendorf served as the director of the Congressional Budget Office from January 2009 through March 2015. Prior to joining CBO, he was at Brookings, where he was a senior fellow, the Edward M. Bernstein Scholar, and the director of The Hamilton Project. He was previously an assistant professor at Harvard University, a principal analyst at CBO, a senior economist at the White House’s Council of Economic Advisers, a deputy assistant secretary for economic policy at the Treasury Department, and an assistant director of the Division of Research and Statistics at the Federal Reserve Board. In those positions, he worked on budget policy, health care issues, the macroeconomic effects of fiscal policy, Social Security, income security programs, financial markets, macroeconomic analysis and forecasting, and other topics.