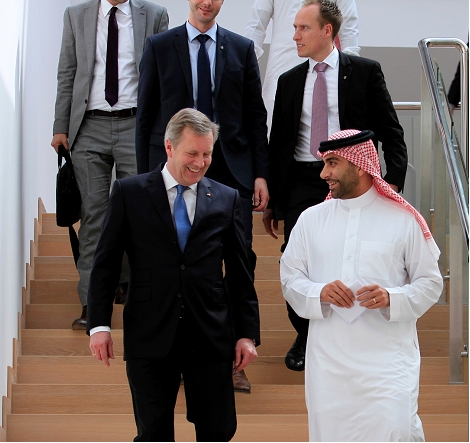 Addressing an audience of business decision-makers at the Prince Mohammed bin Salman College of Business and Entrepreneurship (MBSC) at King Abdullah Economic City (KAEC), His Excellency Christian Wulff, the former Federal President of Germany, said that incubating small and medium-sized enterprises provides an engine for growth and an opportunity to establish long-lasting strategic partnerships to the benefit of Saudi Arabia and Europe.

Mr. Wulff was speaking on the topic of Saudi-German Relations and Economic Reflections from the World Economic Forum in Davos as part of the MBSC Connect speaker series. MBSC Connect is an innovative program that brings together local and international thought leaders, practitioners and experts to discuss the global context of today’s business environment.

Mr. Wulff noted that political, economic and cultural relationships between Saudi Arabia and Germany are well established, and that Vision 2030 provided many opportunities for enhanced trade between the two countries. He congratulated KAEC for applying Vision 2030 by embracing and establishing MBSC, which will provide Saudi youth with an international grade education and enable graduates to play a significant and vital role in achieving the vision’s goals.

Mr. Wulff also said that KAEC and MBSC have a role to play in furthering Saudi-German relations, specifically highlighting MBSC’s commitment to supporting and embracing medium-sized companies, which are an essential engine for growth, job creation and innovation. He noted that these companies currently form the backbone of the German economy. SMEs make up more than 99 percent of German firms and account for 68% of Germany’s exports.

In his introductory comments, Mr. Fahd Al Rasheed, Vice-Chair of the Board of Trustees for MBSC, and Group CEO and Managing Director of KAEC, said that at a time when isolationist and protectionist policies may lead to a reduction in the volume of global trade exchange, Saudi Arabia is pursuing the expansion of Vision 2030 and taking steps to increase of the Kingdom’s bilateral trade with the Red Sea market and the world.

KAEC’s strategic location enhances its role as a logistical services hub for the region and makes the city an important implementer of Vision 2030 on the ground he said, noting that King Abdullah Port has reached an absorption capacity of three million TEUs annually, and the Industrial Valley now includes more than 120 national and international companies. These two assets enhance KAEC’s significance as a trade gateway between Saudi Arabia and the world, especially with industrially advanced countries such as Germany, he said.

Officially inaugurated last year, MBSC is the first institution of higher education in Saudi Arabia to focus on developing entrepreneurial leadership skills for students entering government, businesses and civil society. Providing a mix of traditional MBA courses as well as training in soft and applied skills, the College is dedicated to creating fully rounded professionals possessing the total skillset they need to create economic and social value wherever they work.