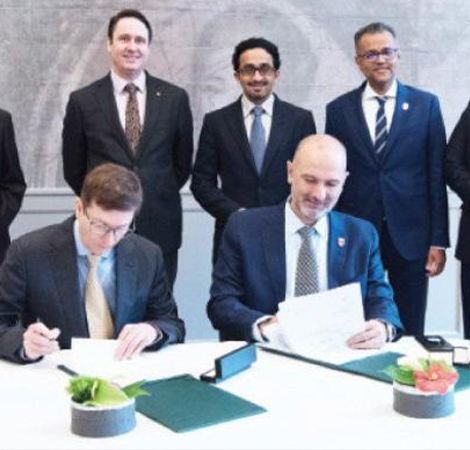 The signing of the agreement took place during Crown Prince Mohammed bin Salman’s visit to France. It was attended by Badr bin Mohammed Al-Asaker, secretary-general of the Misk Foundation.

After signing the agreement, Dr. Nabeel bin Abdul Qader Koshak, dean of MBSC, said: “The Misk Foundation believes in the significance of this advanced program, and it aspires to transfer knowledge and best practices to the nation’s youth, which would in turn contribute to the development of the Kingdom’s entrepreneurial ecosystem.

“This agreement strengthens the ambition of cooperation with the best universities and institutions in Europe, particularly in the fields of entrepreneurship and technology. It will also play a major role in expanding the horizons of those studying at MBSC and enrich their academic and knowledge expertise, in addition to instilling the spirit of entrepreneurship among them.”

Professor Peter Zemsky, deputy dean of INSEAD, said the institute hoped to contribute to the organization of advanced programs in the fields of entrepreneurship, leadership and technology for MBSC students.

“We are excited to launch this important new partnership with MBSC and support their important work in shaping the next generation of Saudi business and public-sector leaders and entrepreneurs. INSEAD is committed to actively engaging in the transformation we are seeing in Saudi Arabia today.”

MBSC is the first private institute of higher education in Saudi Arabia to offer MBA programs in business administration with a focus on entrepreneurship.

The college was launched in collaboration with Babson Global as a vital step toward establishing an entrepreneurial ecosystem in Saudi Arabia in line with the Kingdom’s Vision 2030.