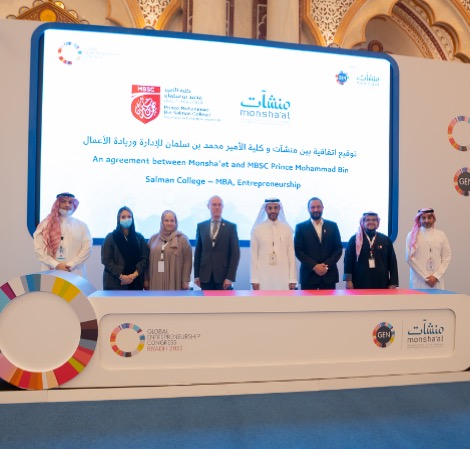 “We are proud of our collaboration with Monsha’at, which furthers the College’s long-term goals and expands its presence in the Kingdom” – Prof. Zeger Degraeve, the Dean of MBSC

“This collaboration aims to strengthen the entrepreneurial culture of the students and enables future generations of seizing the big opportunities offered by entrepreneurship” – Engineer Saleh Al-Rasheed, Monsha’at Governor

KING ABDULLAH ECONOMIC CITY, 30 March 2022: Prince Mohammed Bin Salman College of Business and Entrepreneurship (MBSC) announced today that it has signed a new collaboration agreement with the General Authority for Small and Medium Enterprises (Monsha’at) during the 2022 Global Entrepreneurship Congress (GEC) that is currently being held in Riyadh. As part of the collaboration, the School will offer a part of its Master in Management Program at Monsha’at’s premises in Riyadh.

The new agreement is the latest development within a long-lasting relationship between the two organizations. The move is a part of MBSC’s plans to broaden its operations to Riyadh, the heart and center of business, finance, and decision-making in the Kingdom of Saudi Arabia. The initiative also marks the first time MBSC takes the Master in Management program outside of its campus in King Abdullah Economic City.

According to the agreement, Monsha’at will allocate some of its office spaces and classrooms at the Enterprise Support Center in Riyadh and provide the equipment and technical support for MBSC to offer its academic programs. Meanwhile, MBSC will provide scholarships for Monsha’at’s candidates to join the School’s programs.

Commenting on the announcement, Prof. Zeger Degraeve, the Dean of MBSC, said that “the new deal is a major accomplishment for the first world-class business and entrepreneurship College in the Kingdom and the wider Middle East. We are proud of our collaboration with Monsha’at, which furthers the School’s long-term goals and expands its presence in the Kingdom.”

The initiative, the Dean added, also supports the College’s efforts to bring its academic programs closer to more students through strategic geographical expansion, especially to those based in the nation’s capital where decisions are made and business deals are sealed. The collaboration, Prof. Zeger further explained, would enable the College to take advantage of opportunities Monsha’at opens up for young Saudis to help them start their own small and medium enterprises (SMEs), in turn driving growth in the national economy and sustainable development – which are among the aspirations of the Kingdom’s leadership and the objectives of Vision 2030.

Expressing his delight in the renewed collaboration with the region’s top entrepreneurship College, Eng. Saleh Al-Rasheed, Governor of Monsha’at, said that the latest agreement would boost the strategic partnership between Monsha’at and MBSC, as this collaboration aims to strengthen the entrepreneurial culture of the students and enable future generations of seizing the big opportunities offered by entrepreneurship, which contributes to achieving Monsha’at’s goal of making the SME sector a main driving force of the Kingdom’s economic growth and an enabler of Vision 2030 and beyond.

In addition to regulating the SMEs sector in the Kingdom, Monsha’at provides support and sponsorship based on best practices to help these SMEs to maximize their productivity and contribution to the national economy on the one hand, and grow and create more jobs on the other.